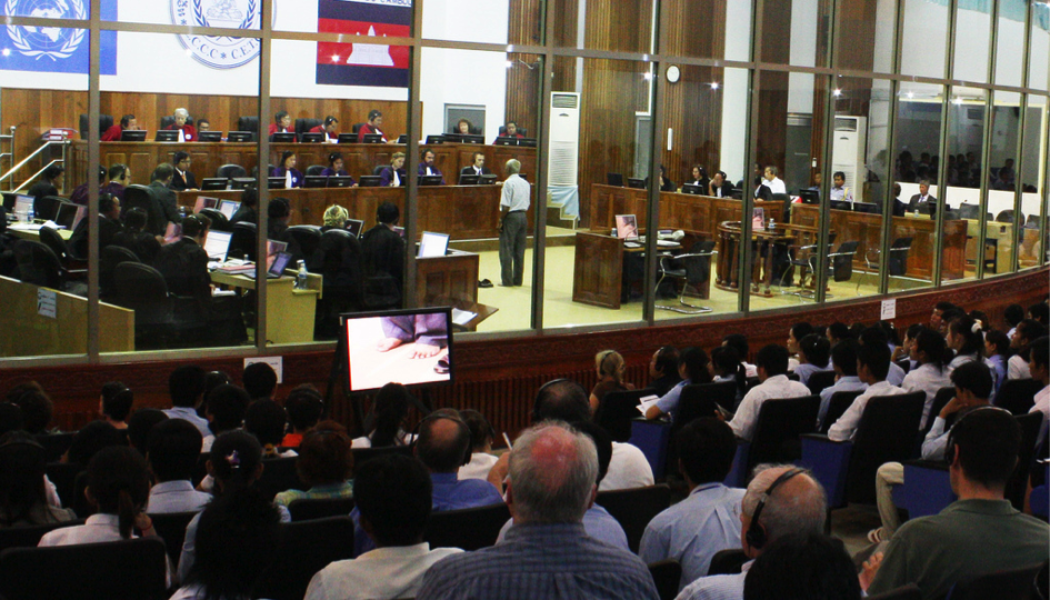 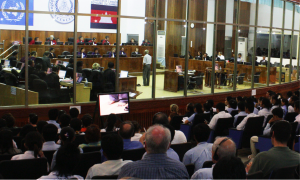 In national systems of criminal procedure that recognize Civil Parties, they express their suffering as their testimony proceeds. At the Extraordinary Chambers in the Courts of Cambodia (ECCC) however, the first fifteen Civil Parties who came to testify in the first trial of Case 002, from the end of December 2011 to the middle of May 2013, were only allowed to discuss their suffering after the other parties had finished asking them questions on the facts at issue. The President of the Trial Chamber notably required Civil Party Lawyers to avoid questions about suffering. Only after they finished their testimony were the Civil Parties allocated time that was specifically dedicated to the expression of their suffering.

Isolating the Civil Party’s statement of suffering from his or her testimony was not, however, without certain procedural problems. As discussed below, these statements of suffering could indeed cover the entire scope of Case 002, although the first trial in Case 002 is limited to only a certain number of charges (1). Furthermore, if parties were allowed to make comments, it was only after the Civil Party had left the courtroom. Thus, any possibility of further examination was precluded (2).

On September 22, 2011, the Chamber decided to split the indictment into several mini-trials that each focused on a limited number of crimes. The first trial, “Case 002/01”, started in November 2011 and is currently still underway.

On October 22, 2012 before the fourth Civil Party Yim Sovann began her statement, the Lead Co-Lawyers for the Civil Parties made a request to the Trial Chamber of the ECCC. In their view, the Civil Parties’ statements of suffering could not be limited to harm related only to the crimes tried by the ECCC in Case 002/01 (principally crimes associated with forced evacuation of the population and the immediate consequences of this on evacuees as they arrived in the countryside), but should cover all of the suffering endured by the Civil Parties throughout the regime of the Khmer Rouge.

The Trial Chamber, in a decision of May 2, 2013, responded positively to the request of the Lead Co-Lawyers. It affirmed having distinguished at all times between facts and suffering. The Civil Parties’ testimonies focused on facts at issue. They were therefore confined to the scope of Case 002/01 and subject to adversariall argument. The statements of suffering on the contrary related only to Civil Parties’ suffering, that is why they might be made freely without restriction as to scope.

In practice, it is difficult to maintain this distinction; the possibility to separate the suffering from the facts that it proceeds may seem illusory. Facts and suffering are closely linked to each other. Thus, when the Civil Party Chau Ny sought to question defendant Khieu Samphan about a letter that the Accused allegedly sent to his uncle during his statement of suffering on November 23, 2012, he unexpectedly introduced new facts. In this letter, which was not mentioned during the testimony of Chau Ny, the Accused allegedly requested his uncle to return to Phnom Penh shortly after its evacuation. Because the Civil Party’s uncle, allegedly a friend of Mr. Samphan, disappeared shortly after receiving the letter, Chau Ny asked the Accused where the body could be, in order to offer a traditional ceremony and relieve his soul.

The President did not authorize Khieu Samphan’s defense lawyer to ask additional questions to Chau Ny. The Trial Chamber did, however, insist on hearing an answer from Mr. Samphan, who instead exercised his right to remain silent by refusing to answer the Civil Party, thereby ending the discussion.

Parties were required not to interrupt the Civil Parties during their statements. However, the Chamber provided them the opportunity to make comments, after the Civil Party had left the courtroom. These comments were intended to highlight excerpts from the statement that the parties perceived as irrelevant to Case 002/01. The comments were made in the absence of the Civil Party, in order to avoid new trauma. But the defense argued, for instance with regard to Chau Ny’s question to Mr. Samphan, that such comments did not allow for a real adversarial debate to take place on the statements. Although Civil Party Lawyers remained in the courtroom to answer the objections made by the other parties, the Civil Parties was unavailable for further examination.

2. The Examination of the Statement of Suffering

Following the incident of November 23, 2012, Khieu Samphan’s Defense team filed a motion to recall Chau Ny. It also requested that, the order in which hearings on the testimony of the Civil Parties were held be changed, to allow for adversarial challenge. In its decision of May 2, 2013, the Trial Chamber partially granted the request and recalled Chau Ny, who came to testify a second time on May 24, 2013. But the Trial Chamber refused to change the procedure: sufficient safeguards existed in the current procedure to ensure respect for the rights of the defense.

However, for the fifteen other Civil Parties who came to testify on the impact of the crimes on the victims, after Chau Ny’s second testimony, at the end of May and in the beginning of June 2013, the procedure was different. Instead of giving their testimony on the facts at issue, these Civil Parties each made a “victim impact statement”. Their statement on the harm they suffered under the Democratic Kampuchea regime took place either before or after being questioned by their lawyer. Because during these statements, the Civil Parties recounted their own experience of the facts, in addition to their suffering, the Prosecution and the Defense were allotted limited time to question them after they spoke.

In its decision of May 2, 2013, the Trial Chamber failed to decide on a key point: the weight it would give to the statements of suffering made by the first fifteen Civil Parties when deciding the verdict, and the sentence that may result. According to the ECCC Internal Rules (Rule 87.2), the Chamber shall base its decision “solely on the evidence that has been put before the Chamber and subjected to examination” (although note that in the French version of the provision, “examination” is translated by “débat contradictoire” whose translation is usually “adversarial argument” as used in the Trial Chamber’s decision and not “examination”). So, in principle, because the Civil Parties who gave statements of suffering were not examined on the contents of their statement (except if they introduced new facts), these statements should be merely symbolic and not be used by the judges as evidence.

The positions held by the parties and the judges, however, suggested otherwise. The Lead Co-Lawyers for the Civil Parties argued that the purpose of these statements was only to allow judges to assess the impact of the crimes on victims. Because suffering did not provide evidence on the acts and conduct of the Accused, it would not prejudice them.

In its previous judgment in Case 001 against Duch, the former director of S-21 prison, the Chamber took the gravity of the crimes into account to determine the sentence to be served, not to establish the guilt or innocence of the person on trial. The sentence must, in principle, correspond to crimes that the court is seized of, but at the ECCC in Case 002/01, the suffering expressed during the statement of suffering extends far beyond the limited scope of the forced transfer of population. The judges shall therefore be circumspect when they decide on the sentence to be imposed, and not condemn a charged person for the suffering of Civil Parties, due to crimes for which his or her guilt has not yet been established. The comments that the Prosecution and the Defense made after the statements of suffering could be used for that purpose: helping the judges to distinguish between what is relevant for the current trial from what is not.

Mélanie Vianney-Liaud
Based in France, Mélanie is a PhD candidate remotely assisting Destination Justice in research. During her time in Cambodia, she was interning at the Khmer Rouge Tribunal in Prosecution's Office, coaching students for the ICRC Moot Court Competition and working on a fair trial rights project with Destination Justice.