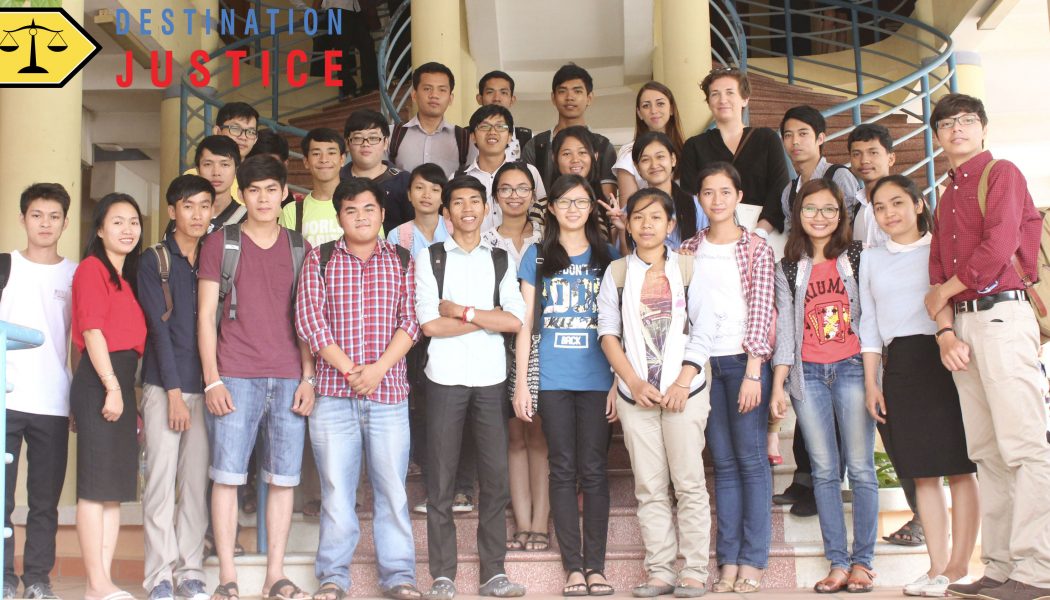 17 July is widely known as International Justice Day.  It celebrates the anniversary of the adoption of the Rome Statute, the treaty that established the International Criminal Court (ICC) in 1998.

As of today, 123 States signed the Rome Statute thus recognizing the importance and the necessity of an independent and permanent International Criminal Court. The ICC is the first permanent international tribunal that has jurisdiction to prosecute individuals for the gravest crimes: war crimes, genocide and crime against humanity.

Since 11 April 2002, Cambodia is a Member to the Rome Statute, being one of the few Asian States to agree to the international criminal law principles. It signaled the government’s commitment to uphold the principles of justice protected by the Statute. 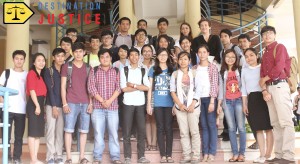 On 17 July 2015, Destination Justice with the Royal University of Law and Economics (RULE)’s Pôle de Cooperation Française, held a workshop engaging students to discuss how justice matters to them.  Around 30 students from different years and programs joined the two-hour event.

Destination Justice Team first gave some insights of its work regarding access to justice and the improvement of the rule of law before explaining to the students the international and Cambodian students the meaning of the International Justice Day.  The debate’s first round focused on the meaning of justice.  As per answers, the students defined justice as “fairness”, “equality before the law”, “truth”, “responsibility”, “non-discrimination”, and “transparency”.   Then, a discussion was engaged involving all the students  on whether justice matters in the Cambodian context and what solutions could be developed to improve it.

The workshop received a warm welcome from the students, some of them joined the Destination Justice Team later on at its newly opened Justice Café & Library to pursue discussions on #JusticeMatters.

Part of the celebration, the portable version of the ICC exhibit #JusticeMatters was displayed at the Justice Café & Library while conversations with special guests on justice took place. Destination Justice Associate Consultant and former AIJI Trial Monitor, Chhaya Chhin, gave a talk about his experience as a trial monitor at the ECCC, and was joined by one of his former colleagues working now for the Supreme Court. 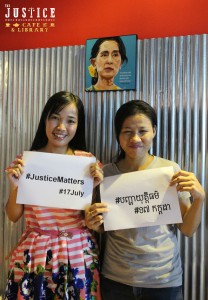 The conversations continued the next day. Noyel Ry, an ECCC Defense Case Manager, discussed the difference of the Law “de jure” and “de facto”, in other words, the theoretical and implementation of the Law in the Cambodian context.  She encouraged the law students in being more involved, for instance by attending trials when they are open to the public as it is one of the best ways to observe the concrete application of their theoretical education.

Sivhoang Chea, an ECCC Associate Legal Officer and Greffier, first explained the division of case 002 into two cases (002/1 and 002/2), before highlighting some of the ECCC’s procedures such as the examination of the witnesses or the preparation of legal documents.  She focused then on the role of greffier within the context of the ECCC including its interactions with other staff members that can turn into interactions of cooperation or contention.

Sophary Noy, an ECCC Defense Legal Consultant, discussed about fair trial right in International Justice based on Article 10 of the Universal Declaration of Human Rights and other internationally recognised principles such as the right of the accused, right to legal representation, or the presumption of innocence.

The set of events received a warm welcome from the attendees who enjoyed talking about how justice matters to them in the safe and engaging space that the Justice Café & Library offers.