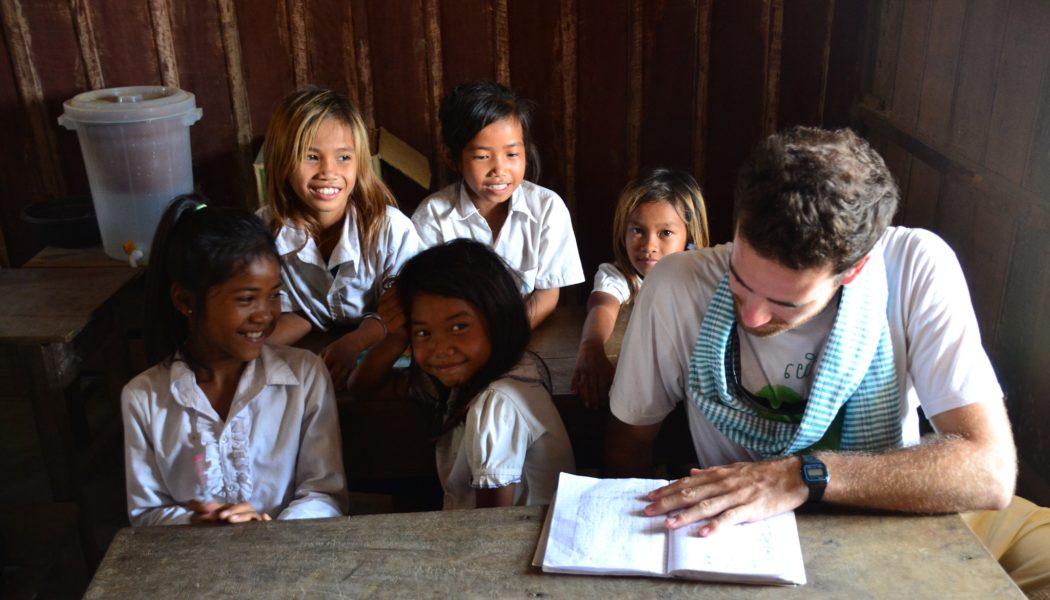 It was another short trip back to my second home in Cambodia. Battambang, the city of the lost stick. In the heart of Battambang lies the reason that initially brought me to Cambodia: the Apostolic Prefecture and most of all, the work of an inspiring figure, ‘Lok-ou-pok’ or Father Kike. 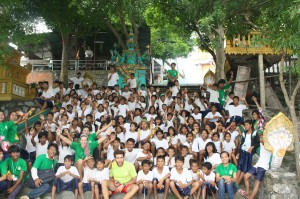 Currently the Bishop of Battambang, Enrique Figaredo, commonly known as Kike, started his work in Southeast Asia back in 1985. He first worked with Cambodian people, mostly with the disabled, through the Jesuit Refugee Service (JRS) in the refugee camps in Thailand and later in Banteay Prieb, a technical formation school for disabled people facilitating the repatriation of refugees. The Apostolic Prefecture of Battambang, where Kike is now based, covers 9 provinces, supporting 26 communities and the populations surrounding them with especial attention given to those most vulnerable: the children, the disabled and the abandoned. The Prefecture runs programs related to education, agriculture and rural development, support to people with disabilities, health and promotion of Cambodian culture.

I landed in Cambodia in July 2012 with a group of 24 Spanish youngsters, mainly students, ready to embark in what would be an unforgettable and unique 5-week program. It all started back in 2005 when a group of Kike’s friends decided to organise a small summer camp for around 100 Cambodian kids within the premises of the Prefecture in Battambang. During my volunteering experience, more than 1’500 kids altogether attended our weekly summer camps in Battambang and the surrounding villages of Tahen, Ta Om, Nikhum, Pailin and Chomnaon. Not only did we coordinate activities for all the kids attending the camps, but most importantly learned about Cambodia, its people and the extraordinary work of Kike. The joy, the smiles and the hope this country inspired me to such an extent that I was convinced to return to Cambodia. 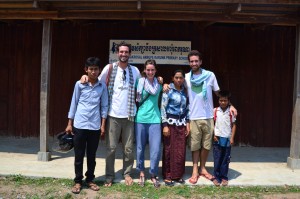 And so it happened! Since January 2013 I have been living in the capital city of Cambodia, Phnom Penh, working for Destination Justice. A little closer to Battambang and its magic. Therefore on Saturday 23 March 2013 myself and my housemate Gabrielle decided it was time to make the trip up to Battambang, to visit my second home. I can’t tell you how much I was looking forward to it – never mind the 8-hour bus trip due to a flat tire and traffic jams. Once in Battambang, my friend Manu, the group leader during the 2012 summer camp and currently a long term volunteer for the Apostolic Prefecture, was waiting for us. He had organised for both of us to stay in the calm premises of the Prefecture, a little oasis only 3 minutes away from Battambang’s central market. Manu works for the Education Program, ‘Krom Aubrum’ of the Prefecture which was set up in 2009 by Kike in order to promote access to primary and secondary education in the most rural and remote areas of northwestern Cambodia.

After enjoying the company of students from Arrupe Center, which provides housing and support to disabled and mine amputees, and is also run by the Prefecture, we couldn’t miss the famous circus performance at Phare Ponleu Selpak, a cultural organisation teaching circus, theater performance, music and visual arts skills to rural youngsters. The show is definitely a must! 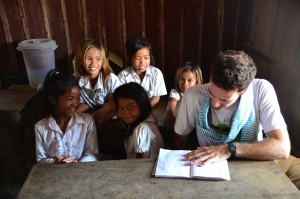 The following day Manu embarked us on one of his daily work trips. It took us around an hour by car to reach the very remote primary school of Bossompor, built in 2012 thanks to the work of the Prefecture, especially Krom Aubrum. Manu and his team must regularly visit the schools they support, such as the one in Bossompor, in order to check the teachers and the schools’ needs. In that sense, Krom Aubrum’s main goal and mission is to enhance the access to basic education in those uncommunicated, isolated and remote villages by supporting schools, teachers and also students through the distribution of material (books, uniforms, pens …), salaries to teachers, construction and renovation of schools.

On the final evening before our return to Phnom Penh, we were able to be part of The Lonely Tree Cafe’s inauguration! Right in the centre of Battambang, this cafe-restaurant has been set up as a social enterprise with the support of the NGO S.A.U.C.E. in order to promote and help finance the work of the Apostolic Prefecture. With delicious food and amazing company, there was definitely no better way to end my little vacation in Battambang.

The next morning, as I sat in the bus and drove away from Battambang, I could not stop thinking about the song:

The centre of my heart!

It was hard to say goodbye

Since the day I’ve been away from you

I worry and think about you every time”