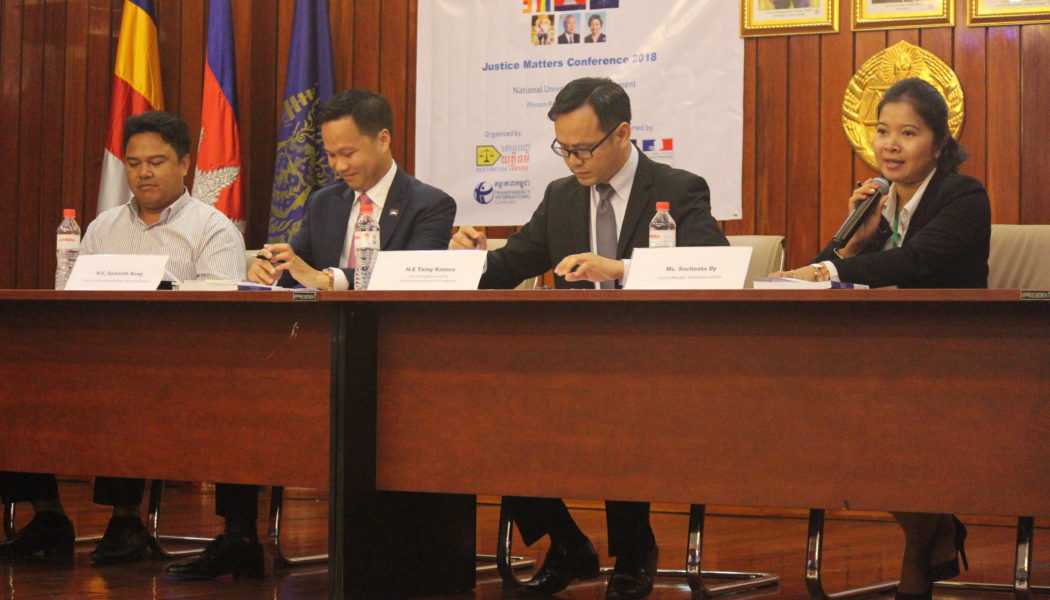 The Justice Matters Conference (JMC) is an annual event, usually organized in July for the celebration of International Justice Day. The conference gathers NGOs, CSOs, policy makers, legal practitioners, academics, as well as young professionals and students. The JMC is a platform allowing all of these actors to come together to engage in collaborative efforts such as discussions and debates, all revolving around justice in Cambodia. Due to the National Elections last July, we decided to hold this year’s conference, co-organised with Transparency International Cambodia, on the 7th December 2018 at the National University of Management, which also enabled us to use the event as an occasion to celebrate and highlight International Anti-Corruption Day.

The JMC had five different panels; three in the morning and two in the afternoon. The themes addressed by the speakers were the following: increasing access to legal information, legal aid and access to justice through the UN’s Universal Periodic Review. Ministry representatives, such as H.E Chin Malin, from the Ministry of Justice, H.E Taing Ratana from the Constitutional Council, and H.E Somarith Keng from the Royal Academy for Judicial Professions, were all panelists. Additionally, many CSO or NGO representatives, such as Claudia de La Fuente from OHCHR, and legal professionals such as Yong Phanith, a representative from the Bar Association of the Kingdom of Cambodia were present. The audience mainly comprised of legal professionals, students, NGO representatives, monks as well as media representatives.

H.E Chin Malin made the opening remarks, in which he described recent progress made by Cambodia in the arena of legal reform, and what to expect in the future, in the field of justice in Cambodia. Following His Excellency’s remarks, the JMC was underway, and thematics deriving from justice in Cambodia to corruption were discussed and contested thoroughly by the panelists. Socheata Dy, Destination Justice’s country manager, took the time to speak about the Annotated Constitution of Cambodia (ACC,) as the 2018 JMC marked its one year of publication.

Finally, at Destination Justice, we believe that it is essential for young people to be able to participate in such a dialogue, so as part of this year’s conference, we launched a Youth Voices Contest, in which we asked students and young people to submit creative written work where they were expected to explore the topic: ‘Justice and Corruption in Cambodia.’ We received many submissions, and, during the afternoon session of the conference, we gave the stage to the students who had participated, enabling them to present their work orally for up to five minutes each. This was a fantastic opportunity for them to express their ideas and opinions in front of a large audience, and to respond to questions.

The JMC 2018 was a great success – the audience was participative and engaged, reaching 201 attendees. We at Destination Justice were delighted about the turnout, the quality of the speakers, and the young people’s impressive efforts in the Youth Voice Contest. We will be back in action at the 2019 Justice Matters Conference!