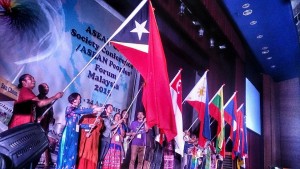 Malaysia, as ASEAN Chair country for 2015, decides to focus this year talks on a “people oriented and people centered ASEAN”. This theme carried a lot of questions during the ACSC/APF from the attendance wondering how the ASEAN could be people-centered when ASEAN is seen as an elite organisation by the People.

But beyond this assumption, the CSOs spend these four days, raising awareness on local and transnational rule of law, human rights and environmental issues, debating the upcoming ASEAN Economic Cooperation (AEC) and its impact on Migrant Workers, challenging politicians and parliamentarians about their commitment to their voters, and working together to propose recommendations to the ASEAN Leaders who will gather in Kuala Lumpur on 24-27 April 2015.

The Malaysian National Organising Committee (MNOC) in charge of this year’s Forum decided to center the debates around 4 axes: Development Justice; Democratic Process; Non discrimination and Equality; and, Peace and Security. These themes governed the four plenary sessions and no less than 70 workshops, as well as a field visit to an indigenous community, 4 pre-session workshops, a Film Festival, a Walk and a lot of punctual events happening throughout the Forum. 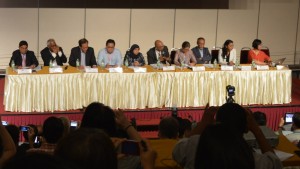 ACSC/APF 2015 Highlights – One of the highlights of the Forum was the “Town hall open discussion between civil society and Parliamentarians” (APHR) which gathered Parliamentarians from Myanmar, Malaysia (ruling party and opposition), Indonesia, Cambodia, Thailand, Singapore. They had to answer questions the future of ASEAN, the main issues faced by their home-country, the meaning of the ASEAN People community, and how they are working with CSOs. All of them agreed on the necessity of redefining the principle of non-interference, proposition renewed by Former Malaysian Foreign Minister, Tan Sri Syed Hamid Albar during its keynote address at the opening dinner on Wednesday 22 April. Indeed countries interfere with each other policies all the time regarding business and investments but refuse to do so when its human rights or rule of law related. According to Mu Sochua (Cambodian National Rescue Party Representative), “we need to built a bridge from already empowered people to the ASEAN which include free and fair elections, multipartism and direct democracy”. Kraisak Choonhavan (MP in Thailand before the 2014 Coup) added that “only CSOs are working crossborders, but parliamentarians should too besides being directed by business and investments”. Finally, they all agree with Charles Santiago (Malaysian MP) that “ASEAN, for now, is an elite project and does not benefit the people” and questioned the fairness of the AEC regarding the fact that huge gaps exist inside each country and within the countries themselves.

Four plenary sessions were held gathering politicians and CSOs representatives on stage before a 1,400 audience. The first one focused on “Toward a People-Centered ASEAN” was addressed by Datuk Paul Low, Minister in the Prime Minister’s Department who advocate that “Human rights is not a zero-sum game but the ultimate realization of the worth and value of people. Human security is a human right and so is the right to development. Yet with the administration of government, the realization of human rights in the context of national and regional diversity at times pose a real conundrum for governments.”

The Second plenary session was CSOs-centered  with representatives from Malaysia, Indonesia, Myanmar and the Philippines, and focused on “Reclaiming the ASEAN community for the people”. Issues regarding migrant workers (documented and undocumented) as well as transnational environmental concerns were raised. Indeed there are millions of migrant workers in the ASEAN Countries who are leaving and working without legal protection both from their home country and host country. The 2007 Cebu Declaration, or ASEAN Declaration on the Protection and Promotion of the Rights of Migrant Workers, is currently a non-binding document which can’t answer the millions of workers’ issues. To answer to that, a coalition of NGOs drafted the ASEAN Standard and Mechanism to protect the rights of workers which is comprised of a binding declaration and a reporting mechanism that will be proposed soon for adoption to the ASEAN Leaders.

The third and four sessions focused on the AEC, with a session addressed by Hon. Corazon Juliano-Soliman, Secretary, Department of Social Welfare and Development of the Republic of Philippines, on “Where should People be in the ASEAN Economic Community”, and the other session on “Making AEC People-responsive” addressed by Anthony Tujan (Philippines, IBON), Tan Sri Dr Munir Majid (Malaysia, Chair of ASEAN Business Advisory Council), Eni Lestari (Indonesia, International Migrants Alliance) and Dr Seree Nonthasoot (Thailand’s representative to the ASEAN Intergovernmental Commission on Human Rights (AICHR)).

These plenary sessions were interspersed with three series of parallel workshops (with 33 workshops by serie). These workshops were an occasion for the CSOs to meet up and to draft common recommendations, to develop new partnerships, or to address safely critical human rights issues as the one of the LGBTIQ community, homosexuality being still criminalised in half of the ASEAN countries. The workshops were also a place to inform the ASEAN CSOs community on current ASEAN initiatives and politics, and to advocate for the inclusion of the environment as ASEAN  fourth pillar raising awareness on multiple environmental issues faced by ASEAN countries and their citizens among them the most vulnerable being the indigenous people. 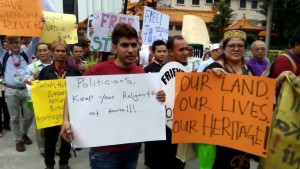 Aside these plenary sessions and workshops, several flash mobs took place asking for the return of Sombath, a Lao activit who “disappeared” two years ago; the end of death penalty, the non-signature of the Trans-Pacific Partnership (TPP); the no-construction of the Don Sahong Dam in Laos which would irreversibly damage the ecosystem life of the Mekong and the life of Millions of Cambodian, Vietnamese and Lao People, etc. Activists and lawmakers of the region tried to raise awareness among the attendance on the issues they are facing on daily faces, and on how CSOs could help each other working together and / or sharing their remedies. During the last day, the ASEAN walk allowed them all to advocate their issues in the street and to attract the People, Medias and ASEAN Leaders’ attention. 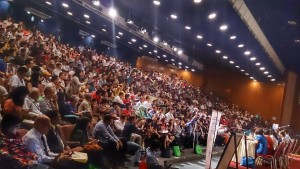 Major Statements and Commitments – One of the major concern raised by the Civil Society and the former leaders of ASEAN regards the Rohingya crisis and how ASEAN is dealing with it. Indeed for Charles Santiago and Malaysian Parliamentarians, resolving Rohingyas statelessness issues is central to Malaysia’s Leadership of ASEAN and they called on the ASEAN Leaders to act on it.

A Malaysian Parliamentarian, Nur Jazlan committed himself to draw the attention of the Malaysian Parliament during the next session about the issue of the Don Sahong Dam. Initially, taken part in the forum to learn more of the people’s concern and to listen to experiences of other Asean members countries, he was “especially [touched by] the environmental issue of the Don Sahong Dam being built in the Laos part of the Mekong River by a Malaysian company. We’ve realised the detrimental effect this project has on the environment”.

Céline is a researcher specialised in Human Rights, and actually serves as Dstination Justice Program Manager and Advisor for our Phnom Penh Office. (Cambodia) Céline also pursues a PhD in International Public Law at Aix-Marseille University (France) focusing on regional protection(s) of Human Rights in Asia.