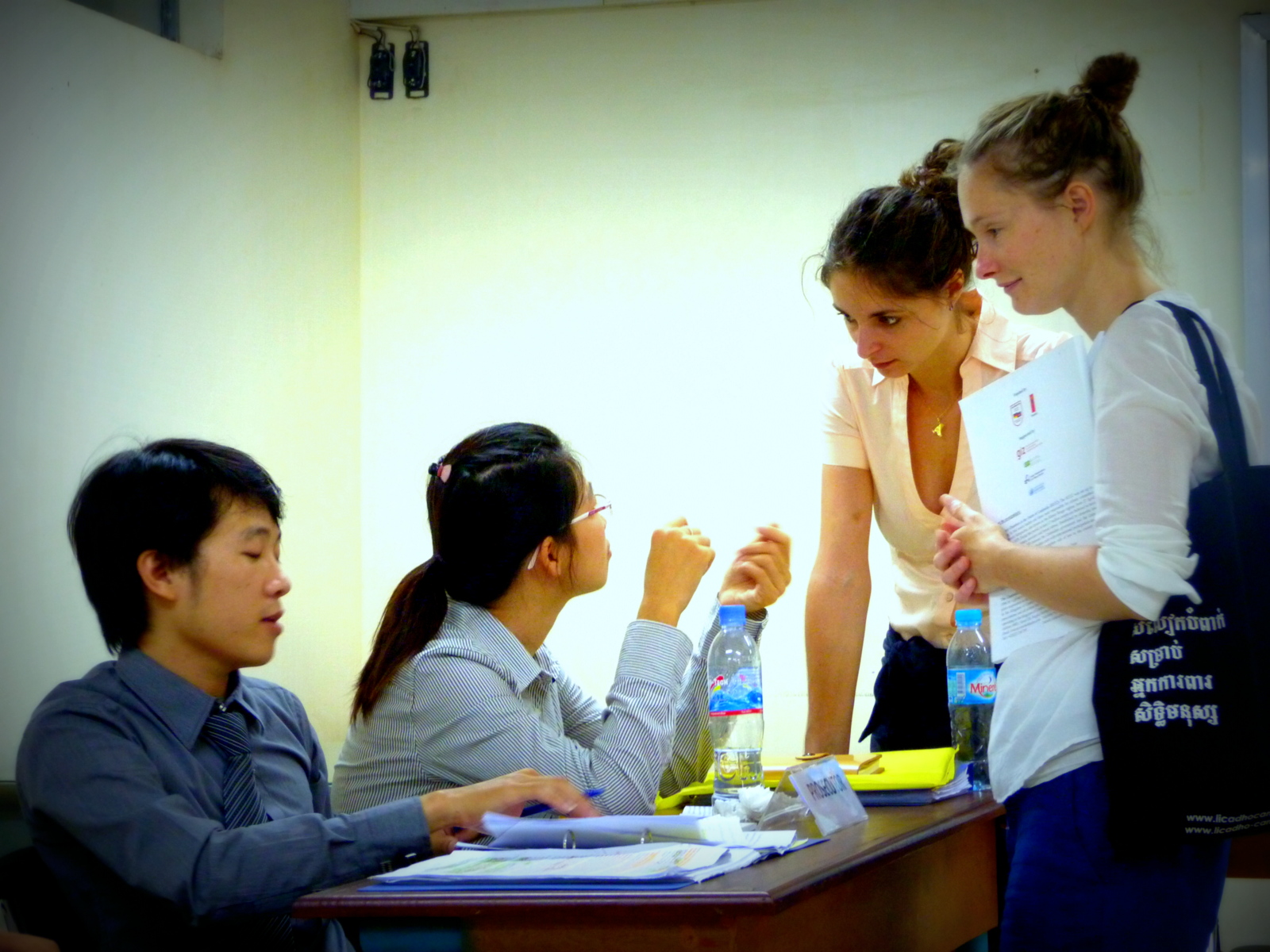 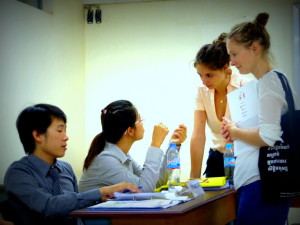 The weekend of the 10th and 11th of November, four International Relations program’s students coached by Destination Justice’s consultants participated for the first time in the International Committee of the Red Cross Moot Court Competition annually held at the Royal University of Law and Economics for the last ten years.

Ieng Sengheng (22), Lay Daro (22), Lek Sothy (21) and Lim Sreynith (21), soon-to-be the first graduates from the International Relations program trained intensively for three weeks as part of Destination Justice’s Legal Higher Education Assistance program. The International Relations program is the first pilot education program where Destination Justice’s consultants are involved. In addition to the International Humanitarian Law course taught by Céline Martin, the four students were coached intensively by two other associate consultants, Julianne Romy and Mélanie Vianney-Liaud, currently respectively working for the Ieng Sary’s Defence Team and the Prosecution at the ECCC. It ended up to a good performance for a first participation and most of all a great experience for these four students where they could appreciate the value of understanding the information to produce an original work. Sreynith considers that “to participate in a competition is already a great opportunity […] the competition is not about winning or losing but about the practical experience”. Sothy adds: “the important thing is that I earned experience” what Daro confirms by saying that they “learned how to read conventions, text laws and case laws more efficiently” […], how to behave or plead before Judges as well as how to work in a team”. 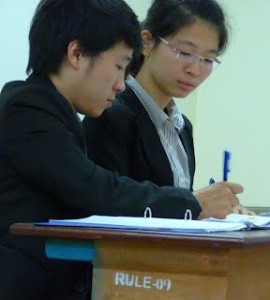 Warned from the beginning of the short timing and the amount of work they would have to deliver, the students took up the challenge. Four to six times a week, the students eager to learn more met their three coaches for at least three hours invading Destination Justice’s office often before the planned time. Sothy enjoyed these meetings where they could “share knowledge and experience” and “discuss the lessons with the lecturers and the teammates”. Sreynith recognises that the preparation was harder than she thought: “We had to start writing every bit of work progressively with little confidence that we can make it. We had to sacrifice time with family or friends. Sometimes I even wanted to quit as I was afraid to fail and not to be able to make a productive work”. Daro added: “During the last days before the competition, I was a little bit messed up since I forced myself to do many things in few days. Everything was new to me, and I had to force myself to adjust”. For Sengheng, he remembers: “I could not sleep at night before the competition because I was very excited and a little bit nervous”.

Lim Sreynith is from Prey Veng province, she is currently volunteering at the National Employment Agency and used to volunteer as a Liaison Officer for the 22nd ASEAN Labour Ministers Meeting. She enrolled the International Relations program because she wants to be a politician and work for the government to develop Cambodia.

Lek Sothy is from Kampong Cham province, he is currently interning at the Ministry of Justice and studying International Relations. He wants to work in the public interest for NGOs or the government. 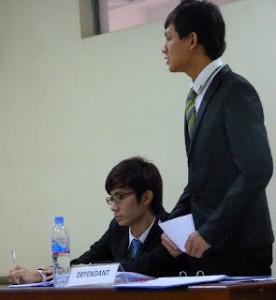 Lay Daro is from Kampong Cham province, he enrolled the International Relations program because he wanted to learn more about the world, the relations between countries and not only Cambodia’s issues. In the short term, he wants to study abroad and has already sent his application for a scholarship in South Korea. In the long view, he wants to work for NGOs dealing with human rights issues.

Ieng Sengheng is from Phnom Penh, he is studying International Relations to fulfill his dream of becoming one day ambassador and representing Cambodia. Like Daro, Sengheng wants to study abroad and waits for an answer to his application for a scholarship in South Korea.

The Moot Court Competition and its preparation are a positive learning experience for these students. They now take more responsibility for their education and think about how they can help the next generation of IR students. Sengheng: “I will deliver the message of this competition to the next IR generation so they can prepare well and be better than me”. Sothy would advise “all students who wish to join this competition to improve their English and be ready for it. Joining the competition is a big deal insofar we need to spend much time researching and analyzing the case. Interested students first have to make sure that joining the competition will not affect their studies”.` Sreynith thinks: “not only I but also my classmates and the following generations of students really need a further and continuous support from not only Destination Justice but the school itself to give us the chance to explore our capacities during our studies and further during our professional life”.

About the International Relations program

Destination Justice is a consultancy comprised of international lawyers and professionals in the field. Its mission is to strengthen rule of law by providing quality advice, research and training, and empowering others to do the same. Destination Justice has established this year a field office in Phnom Penh to provide assistance to a range of organisations’ work on enhancing justice, rule of law and legal education in Cambodia, in particular through its Legal Education Assistance program.

Céline is a researcher specialised in Human Rights, and actually serves as Dstination Justice Program Manager and Advisor for our Phnom Penh Office. (Cambodia) Céline also pursues a PhD in International Public Law at Aix-Marseille University (France) focusing on regional protection(s) of Human Rights in Asia.